By Harriet Alexander, and agencies

French police have begun expelling around 650 migrants from camps in the northern port of Calais, despite opposition from rights groups supporting asylum seekers.

Several of the migrants left voluntarily when they saw the busloads of riot police arrive and surround their camps, from which they had hoped to cross to Britain.

Confusion was widespread, notably at one of the largest camps housing mainly Syrian and Afghan exiles, as the migrants say they have nowhere else to go.

“The people are on edge and are looking for the place where they will feel the safest,” said Cecile Bossy, from the France-based Doctors of the World NGO.

The authorities say the expulsion is aimed at stopping an outbreak of scabies in the camps. 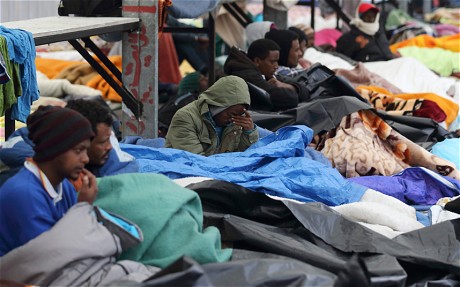 Denis Robin, the prefect for the Pas de Calais region, said that the migrants were not being detained.

“The most important thing for me is the sanitation system,” he said. “There is a scabies outbreak that is worsening in Calais.”

He said that the authorities were working with the Red Cross to offer health screenings, clean showers and fresh clothes.

“I can promise that there will be no detention or checks on residency if the migrants agree to the health screenings. No checks – unless there is a rebellion.”

The 200 riot police and gendarmes were met with protests at the Batellerie camp, where activists from the No Border rights group blocked the road.

A second camp, on Rue Lamy, was the scene of disturbances among the Syrian migrants, La Voix du Nord newspaper reported.

Earlier this month, Asif Hussainkhil, an Afghan asylum seeker, was picked up by the French coastguard two miles off Sangatte, near Calais, after he was spotted from a ferry as he tried to make the 21-mile Channel crossing.

Floating on a flimsy wooden raft, the 33-year-old was trying to reach Britain.

Mr Hussainkhil was taken back to France – but told The Telegraph that he was planning on making another attempt at crossing.

Illegal camps of would-be channel-hoppers have sprung up in the Calais area since the French authorities closed down the infamous nearby Sangatte immigrant detention centre in 2002.

Manuel Valls, who was recently appointed prime minister, took a tougher line on immigration than most of his Socialist party colleagues during his high-profile stint as interior minister.

As the expulsion unfolded in Calais, about 400 migrants stormed across a towering, triple-layer border fence from Morocco into the tiny Spanish territory of Melilla – one of the biggest crossings in nearly a decade.