Capa > Collection > Archive by category 'The right to housing in practice'

The right to housing in practice

Learn about concrete initiatives of governments, organisations of the civil society and of citizens themselves that implemented the right to housing. Here you find examples of initiatives in the legal area, as well as housing projects, policies and programs that, in practice, concretised this right. If you know of other examples, share them in this space. For that purpose, contact the Rapporteur, sending information for publication in this section.

The homeless youth measure, among other things, allocates city funds for expanding existing homeless facilities, including shelters, to include additional beds for “youth who identify themselves as lesbian, gay, bisexual, transgender, or questioning.” It also requires service providers to put in place “best practices for the culturally competent care of homeless youth” who identify as LGBT or questioning.

The Cluj-Napoca County Court (Tribunal) decided that the Mayor’s decision to forcibly evict around 300 Roma in December 2010, to a site adjacent to a waste dump, was illegal.

The South African Constitutional Court issued a groundbreaking decision on this case, brought by ESCR-Net member SERI (South Africa), affirming the rights of tenants to challenge excessive rents and unfair lease terminations. The Court found that the Rental Housing Act forbid private landlords or tenants from engaging in unfair practices, and determined that the term “unfair practice” must be interpreted in light of the right of access to adequate housing contained in the South African Constitution.

Bank of America, one of the nation’s largest banks, was found liable on Wednesday of having sold defective mortgages, a jury decision that will be seen as a victory for the government in its aggressive effort to hold banks accountable for their role in the housing crisis.

Fife rulings could have national implications for future of ‘bedroom tax’

In a statement that could have nationwide implications, Simon Collins has ruled dimensions do matter when it comes to defining a bedroom. The ruling could open the floodgates for appeals by thousands of tenants affected by the new legislation.

In a ruling that could open the floodgates for thousands to challenge the under-occupancy legislation, a tribunal found that David Nelson’s spare room was too small to be a bedroom.

Annie Harrower-Gray had her appeal against Fife Council’s decision to cut her benefit upheld by a first-tier tribunal in Scotland following a hearing on 26 August.

Accountability Counsel filed a complaint on July 10, 2013, on behalf of communities in the Sindhuli District of Nepal, raising concerns about human rights violations associated with construction of a high voltage transmission line funded by the World Bank.

Reaffirming Justiciability: Judgements on the Human Right to Adequate Housing from the High Court of Delhi 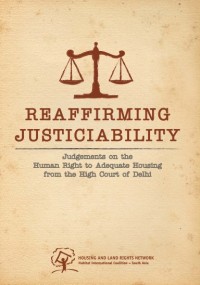 In the year 2010, the High Court of Delhi passed two significant judgements — Sudama Singh and Others vs. Government of Delhi and Anr., and PK Koul vs. Estate Officer and Anr. and Ors. — upholding the human right to adequate housing, and the right to resettlement and rehabilitation. Housing and Land Rights Network (HLRN) considers both these judgements to be very important precedents in Indian case law. They hold great relevance in protecting the human right to adequate housing in India as well as internationally. The judgements, therefore, need to be widely disseminated, read, understood, cited and implemented.