December 07, 2012 The threat of eviction is hanging like the sword of Damocles over 581 families living since many decades in Kalasa hobli. The high court has directed the forest department to evict them within December 31. With the decades-old inam land issue still remains unresolved, the residents are now caught in a catch-22 situation. [...]

Published in Friday December 7th, 2012 In News on the Rapporteurs

The United Nations refugee chief today saluted the “historic” entry into force of an Africa-wide treaty – the world’s first – that protects people displaced within their own countries by violence, natural disasters or large-scale development projects. “Around the world, the number of people forced into displacement within their own countries is growing,” said the UN High Commissioner for Refugees, Antonio Guterres. 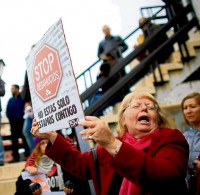 The fact that several of the banks repossessing homes are receiving state funds has fuelled Spaniards’ anger. On December 2nd, Tarragona city hall in northeastern Spain revealed it was planning to cut off ties with any bank that evicted local people who could not pay their mortgage. In doing so, it was following a handful of other towns and cities across Spain which have responded in a dramatic way to a deepening evictions crisis.

A battle for social justice in South African townships

International gatherings of the great and the good often proclaim their commitment to poor people, but then end with the powerful maintaining profits before people. But, with the poor actually getting a say for a change at a cities summit this week in the Senegalese capital Dakar, their aim will be to ensure the urban needs of Africans are addressed. Nearly 5,000 participants, representing the public and private sectors, including ministers for local government and sustainable progress, will share their experiences and ideas at the summit. It makes the event, Africities, the most important forum on the continent for dialogue on decentralisation, governance and development.

Almodóvar: The Disaster of Evictions

In the past two weeks, two Spaniards who were facing eviction from their houses committed suicide. More than 350,000 people in Spain have lost their homes since the onset of the economic crisis in 2008. These tragic deaths have attracted public attention and a group called “Stop Evictions” has organized protests to block families from being evicted.

China to flatten 700 mountains for new metropolis in the desert

In what is being billed as the largest “mountain-moving project” in Chinese history, one of China’s biggest construction firms will spend £2.2bn to flatten 700 mountains levelling the area Lanzhou, allowing developers to build a new metropolis on the outskirts of the north-western city.
The Lanzhou New Area, 500 square miles (130,000 hectares) of land 50 miles from the city, which is the provincial capital of arid Gansu province, could increase the region’s gross domestic product to £27bn by 2030, according to the state-run China Daily. It has already attracted almost £7bn of corporate investment.

Obama’s Storm-Aid Bid to Be About $50 Billion

Published in Thursday December 6th, 2012 In In the media

President Obama plans to ask Congress for about $50 billion in emergency funds to help rebuild the states that were ravaged by Hurricane Sandy, challenging deficit-minded lawmakers while worrying regional leaders, who complained Wednesday that it was not enough.

The White House will send the proposal to Capitol Hill this week, and while the final sum is still in flux, it should be between $45 billion and $55 billion, according to officials briefed on deliberations over it.

How the Coastline Became a Place to Put the Poor

In retrospect, after the storm, it looked like a perverse stroke of urban planning. Many of New York City’s most vulnerable people had been housed in its most vulnerable places: public housing projects along the water, in areas like the Rockaways, Coney Island, Red Hook and Alphabet City.
How is it possible that the same winding, 538-mile coastline that has recently been colonized by condominium developers chasing wealthy New Yorkers, themselves chasing waterfront views, had been, for decades, a catch basin for many of the city’s poorest residents? The answer is a combination of accident, grand vision and political expedience.

December 04, 2012 By Elizabeth Zeldin, Program Director As we continue to focus on the effects of Superstorm Sandy on the New York area, it is important to acknowledge that the hurricane also devastated communities in the Caribbean, where millions of homes have sustained significant damage. I recently spoke with Jamaica-based grassroots leader Carmen Griffiths to [...]

Published in Thursday December 6th, 2012 In In the media

December 04, 2012 The Rabat Declaration on Making Slums History was unanimously adopted by country delegations at the closing of the international conference held in Rabat, Morocco late November. The declaration reaffirms the irreversibility of urbanization and its positive impact in advancing human development and poverty reduction. It recognizes the need to promote inclusive slum [...]